French Cuisine slot is a 3D online slot game set in a dimly lit restaurant in Paris that serves French cuisine in a fine dining environment that happens to be the home of some mice.

The five reel and three row setup is set on an elegant restaurant table where the function buttons are displayed among the table’s setting and the Eiffel Tower is seen in the far distance.

There are a total of twenty selectable pay lines spread across the French Cuisine slot reels. A choice of one; two; three; four or five coins can be bet on each of the twenty pay lines with the coin values being available in denominations of 0.01; 0.05; 0.10; 0.25; 0.50 and 1.00.

The betting range for each spin is quite wide making the game a good option for all level of budgets. The minimum bet allowed is 0.01 and the maximum bet per spin is 100.

The symbol showing the resident mice of the restaurant is the French Cuisine slot wild symbol. The mice symbol will only appear in position on the third reel and since it is an expanding wild it will cover all three positions on the reel when it appears.

The wild symbol helps to create winning combinations on active pay lines by substituting for all symbols apart from the two scatters.

Other French Cuisine slot symbols that are present on the reels include a cash register; the fat French chef; a view of the restaurant; silver platters; dirty dishes in the scullery and a mouse trap among others.

The most valuable symbol is the roast leg of beef symbol which needs to appear five times on an active pay line to award up to 3 000 coins. 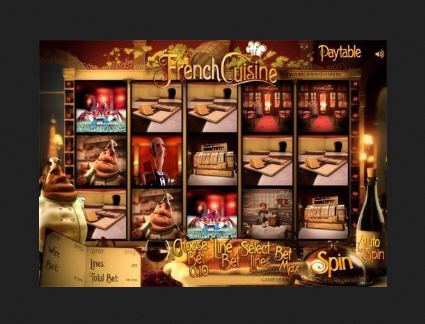 The waiter symbol is the scatter symbol that only ever lands on the first, second and third reels but when the waiter is seen three or more times anywhere on these reels he activates the French Cuisine slot featured bonus game.

This bonus game consists of the waiter serving several meals of which any starters, mains and deserts can be selected.

Choosing a dish results in winning a pay out as each meal has a hidden prize. One dish will however have been eaten by mice, which will be the dish to end the bonus feature if selected.

A live crab that is to be served up is the French Cuisine slot game’s second scatter symbol. This symbol only lands on the first, third and fifth reels and when it does appear three, four or five times in any position on those reels the click me bonus feature is activated.

The click me bonus feature is commonly found on Blue Gem online slot games and consists of clicking on selected symbols to reveal mystery prizes. Unveiling the collect icon will end this bonus round and the resume the main slot game.